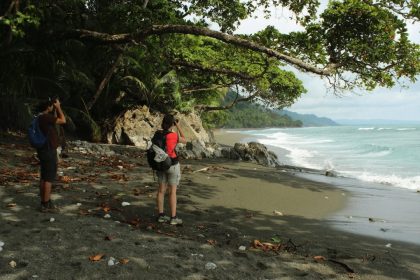 Finca Exotica´s sustainability for the environment is paramount in all of our daily practices, preserve our paradise is of vital importance to us. Why? Because we are located in Playa Carate, Osa Peninsula, just four kilometers from the majestic Corcovado National Park, and the following article will explain why this area is considered a paradise!

The Osa Peninsula is a very special place in Costa Rica and around the world. It has a wealth of species and is an area of ​​high endemism of plants and animals; ie there are species that exist only in this place. This high rich biodiversity is due to its geographical location, topography, climate and the characteristics of the soil, which allows the existence of different ecosystems and habitats. On the Osa Peninsula, there is the only remnant of tropical largest Pacific coast of Central America, complemented with other environments such as cloud forests, gallery forests, waterlogged or flooded, swamps, rivers and lakes and rainforest. Its importance also lies in the exchange and development of flora and fauna from North and South America, as well as allowing the development of a large number of endemic or unique species. Osa is one of the most outstanding examples of forest containing endemic or unique species, and is one of the most outstanding examples of rainforest for its biodiversity and size of trees (up to 80 meters high and 3 meters in diameter).

What you will find in the Osa Peninsula?

You will find 13 ecosystems, including lowland forests, cloud forests, gallery forests, lakes, mangroves and freshwater wetlands, beaches and coral reefs. Between 2 and 3% of the flora of Osa does not exist anywhere else on earth, ie they are endemic.

Other approximates about the flora and fauna of the Osa Peninsula data are:

More than 700 species of trees.

More than 375 species of birds

762 species of molluscs (terrestrial and marine)

To guard this wealth, the government has created protected areas covering some 144 294 hectares (representing 31.8% of the peninsula), of which 87 959 hectares are effectively protected areas that are national wildlife refuges (of which Finca Exotica is part of Saimiri Refuge, see here for more information: http://fincaexotica.com/saimiri/?lang=es ) and 56 335 hectares (12.4%) are absolute protection (national parks).

Of the national Parks of the Osa Peninsula, the most impressive is the Corcovado National Park.

A stunning green, the dizzying height of its trees hosts 2.5% of global biodiversity: The Corcovado National Park in southern Costa Rica. The National Geographic has called it “the most intense place on Earth, biologically speaking,” since it is estimated that there is nowhere else with a similar extension housing so much biodiversity.

Corcovado has 2.5% of the planet’s biodiversity and 50% of species of Costa Rica. “This is a unique park for two reasons, because the percentage of high biodiversity and it’s the last piece of rainforest on the Pacific coast of Mesoamerica,” said Costa Rican biologist Jose Joaquin Ortiz.

Located 350 kilometers from San Jose in the Osa Peninsula (South Pacific), the park has an enviable biodiversity.

It has 42 570 hectares of land and 5,375 hectares of sea, including coral reefs, mangroves and freshwater wetlands.

For six trails, visitors can walk for about three hours, or more, to dive into a world of scenic beauty graced by pumas, four species of monkeys, snakes, jaguars, tapirs and peccary, the last three in danger extinction. There are hundreds of species, including 140 mammals, representing 10% of mammal species on the continent and the American Pacific retains the largest primary forest.

In the voluptuousness of its 500 species of trees, Corcovado is home to 350 species of birds, including parrots, brown pelicans, scarlet macaws, herons, egrets and blue owls.

The Sirena, Llorona and Madrigal rivers nourish this space, which is a biological corridor of flora and fauna, where his blue colors intertwine with green leaves.

In the hills and streams and reservoirs side slopes of rivers and streams you can be found gold, the result of a process of mineralization.

Each year, over 34,000 people visit it, mostly foreigners, however, for this the rangers regulate entrance so that the park is not affected, because the most important is its preservation.

Go because we are located in a paradise! Apart from all the wildlife that you will see in our surroundings, Finca Exotica has several trails within the property that take you into the primary forest, have magnificent sea views, see several species animals and are strategic for those who want to visit La Leona stations and Sirena in Corcovado National Park, because of our proximity to them.

Come and live the experience, the most intense place on Earth … biologically speaking!

What you can read next 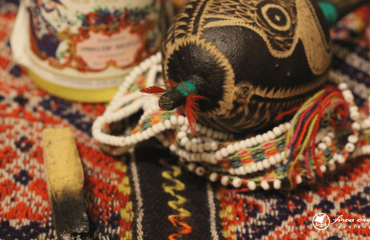 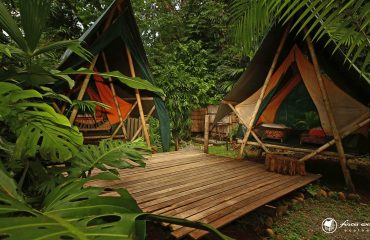 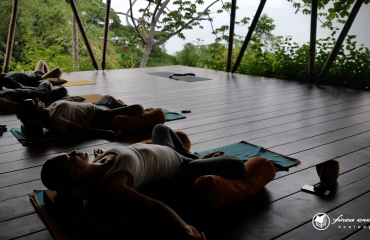 Yoga retreat in Corcovado: the savasana on earth